Matt finished the Grand Loop yesterday at 4:20 pm! It took him 3 days, 20 hours and 40 minutes. Let me reiterate MATT FINISHED THE GRAND LOOP. He had a sore rear end and an insatiable hunger. I'm so psyched for him, such an accomplishment and inspiration. I was glued to the computer this weekend watching the spots out there. Matt of course didn't have one so I watched mainly Jefe's. I got to meet Jefe at the finish thanks to that spot and it was so fun to listen to his stories and laugh. Jefe is an amazing rider and person and has a great attitude and spirit, a true mountain biker, earth dog and one humble dude. We love you Jefe!
Here are some shots of him at the finish. 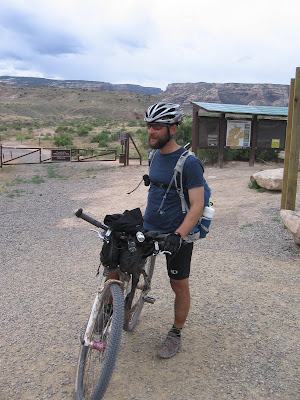 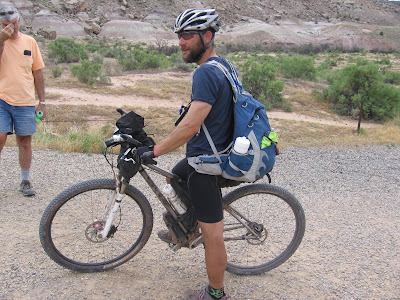 I then went riding around the Tabeguache until early evening in hopes to get a glimpse of Matt even though I figured it was still too early; he wasn't planning on necessarily racing as much as just finishing the beast. I left and returned to the trailhead later until almost 10 pm, anxiously anticipating his return. I reasoned with myself again that he probably wouldn't be done until early am Tuesday. I headed to work at 5:45 am Tues and left him instructions to call me immediately upon returning to the house. By 10 am and no call my stomach started to turn. Logically it probably made sense that he wasn't back yet but anxiety and worry got the best of me and I became an emotional wreck. I kept thinking about the things that could happen out there and wondered at what point I needed to start worrying. The whole time following Jefe's finish I wished Matt had a spot. The day after Jefe finished I swore Matt would never do this again without a spot. I think I knew he was ok but weirdly became overly concerned with how he was feeling, how he was suffering. I know what pain is in endurance biking but to be out there for days alone with the pain is different. I had an overwhelming empathy for him and his suffering and "spoke" words of encouragement with eyes closed and heart open, hoping he'd hear me. It may all sound corny now that he's home safe and sound but it's just hard not knowing. He's now one on a short list of guys who have finished this. He's been humbled by the beast but modest about his achievement. Big congratulations to all who attempted, finished, didn't finish, rode their bikes this weekend for a long ass time on the Grand Loop!
Posted by Cat at 9:06 PM

Awesome job to Matt and Jefe. It's a big bad loop and I'm super impressed.

Matt - AWESOME JOB! Congrats amigo, and I can't wait to hear the stories next time I see you.

Cat, wow I can imagine the anxiety.

Cat...
"Logically it probably made sense that he wasn't back yet but anxiety and worry got the best of me and I became an emotional wreck. I kept thinking about the things that could happen out there and wondered at what point I needed to start worrying."

This is why I got a Spot as soon as they came out. My wife is now more relaxed, she occasionally checks my track, if its moving then I am probably 100% ok and at least still mobile. When I stop to sleep or rest for an extended period in the middle of the day I usually send her the “I am OK” message. I have also used the “I am ok but Come Get Me” message at the end of the AZT to inform my pick up ride to meet me at the TH. To let others watch my “Dots” is just a fun side issue.

Hey kids! Got your note from the bb, thanks for the offer of hospitality.

I posted some pics and story up on my blog here: http://zipspot.blogspot.com/

Talk to you soon. Back to the day job...